LANAP®, which stands for laser assisted new attachment procedure, is a revolutionary form of periodontal therapy now offered by Dr. Makram at our North Naples dental office. Unlike traditional periodontal surgery, which uses a scalpel and stitches, LANAP® in North Naples uses only a high-quality dental laser.

Why is LANAP® better for the treatment of gum disease? 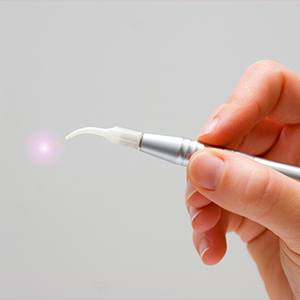 The LANAP® Procedure is about as easy as erasing a blackboard — there's no cutting and no suturing.

There’s much less discomfort—during and after the procedure—with LANAP® than with standard surgery.

It takes less time than traditional surgery. All it takes is two two-hour visits to the dentist and two follow up visits. Traditional surgery requires four sessions of about one hour each, with subsequent visits for suture removal and additional check-ups.

Following traditional surgery, recovery can take between two to four weeks during which patients can experience considerable pain and swelling, and they may be restricted to liquid or soft diets.

With LANAP, there’s a less than 24-hour recovery period, so you won’t lose time from work.

The LANAP® Procedure is safe for patients with health concerns such as diabetes, HIV, hemophilia, or those taking medications such as Plavix or aspirin.

What is Periodontal Disease?

It's an infection of the gums. It starts out as plaque, an opaque film on the teeth that hardens to form calculus or tartar. As tartar accumulates, it harbors bacteria which attack the soft tissue around the gums. This early stage of gum disease is called gingivitis. Symptoms include red swollen gums, bleeding, bad breath and, sometimes, an unpleasant taste in the mouth. Untreated, gingivitis becomes periodontitis. At this severe stage, bacteria destroy both the gums and the supporting bone structure. Pockets form where teeth are separated from the gums and surrounding bones. Left untreated, periodontitis eventually results in tooth loss.

The LANAP® Procedure uses a special kind of laser called the PerioLase® MVP-7™, invented by two dentists in Cerritos, California. Dr. Robert Gregg and Dr. Delwin McCarthy spent years developing a better way to treat gum disease. The laser fiber, which is only about as wide as three human hairs, is inserted between the gum tissue and your tooth, where it painlessly removes the noxious elements that cause gum disease.

How many treatments will I need?

The LANAP® Procedure doesn’t take much time at all—just two two-hour sessions versus eight to ten one-hour sessions with surgery. You don’t have to worry about bleeding, stitches, or post-treatment infection, because your gums haven’t been cut.

What about recovery - will I be in pain or need to follow a special routine?

The sense of recovery is immediate, due to the laser’s ability to seal blood vessels, lymphatics, and nerve endings. Of course, your tissue needs time to recover, regenerate and heal over the course of time, but after the LANAP® Procedure treatment, you can drive your car, go back to work, or do anything else you like.

I can see how good the LANAP® Procedure is, but is it very expensive and will my insurance cover it?